B and B Cradle Mountain

B and B Cradle Mountain 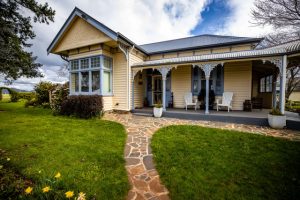 We replaced the roof of the house on our B and B in Cradle Mountain, as the previous owners used the evaporation method for the leaks. We found 12 buckets hanging in the roof to catch the water and I think they hoped it would evaporate before the next rain…so we needed to sort this out properly.

One of the spaces we needed to create was a laundry; there was a tiny room enough for a washing machine only – we now have two washing machines, two dryers, shelving, benches etc and we replaced the old 1950s’ sink and cupboards, plus the rotten wall in the kitchen. The previous owners had used an outside tap under the sink.

The veranda had already recently been painted, but looking at it, it now needs another repaint. You can see it was once cream, then green and then red – we matched it to the roof colour.

We’re still working on the kitchen: refining the wooden cupboards that are sound, plus we enclosed the deck with glass sliding doors and tiled the floor so 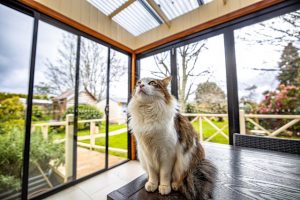 we have a room we can use year-round.

We made the mistake of cleaning the path to the front door thinking it was good that we only found broken pieces of concrete, so we replaced this with crazy paving using stone from the local quarry.

There was a lot of rewiring that needed doing, new TV points and an aerial, new hot water systems and water pipes, but that’s to be expected when you buy an old house. We also replaced 6 windows and the windows in the enclosed part of the veranda; we used a great local tradesman who remade the sash windows using the original hardware on the old windows.

Work to be done

We need to go over all of the other old windows and replace the putty, lots of floor boards need attention as they need either small areas of rot dealt with or some need replacing. Any old house will always need some maintenance and attention paid to it, so it doesn’t lose its charm.

The wrought iron fret work needs rust-proofing and repainting. We have a plasterer organised to fix cracks in the old plaster walls; it’s all superficial work, but will be fixed and repainted and we’ll also put back the ceiling roses in the bedrooms and decorative cornice work for the time period of the house. This will be done over the winter when we are quiet. We are also replacing the light fixtures in the bedrooms. We have a beautiful crystal chandelier for the red room that will also be installed soon.

We’ve recently built a new chook house and worked on the yards, there’s also a new duck house, too; the poor ducks that were here didn’t have a house so they now have the Duck Den.

All the fencing needing fixing or replacing…we’re still working on this. Currently, we are splitting the front paddock into four paddocks so we can rotate stock. All of the gardens were extremely overgrown and full of weeds. Essentially, we had a garden of onion weed. It has taken two years of pulling out the onion weed by hand to get it under control. We created new gardens while repairing the old gardens. Our next tasks are creating permanent garden boarders either from local stone or old bricks and we’re going to create a new seating area under the blackwood tree. 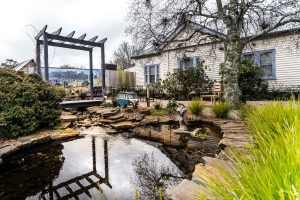 The pond area was the worst of the lot! We didn’t even know there was a pond until Russ fell in it looking for the septic tank. There were four giant flax plants as big as the house hiding the ponds; it took two strong men with chainsaws and a digger to remove the plants. The ponds were in an awful state and of no use. Like everything else, we are trying to put things back to how they were – so we redid the ponds with a waterfall and a bridge.

The vegetable garden was just a weed-filled paddock; the weeds were so high you could just see the roof of the hot house. Russ rebuilt the hot house and we have managed to tame the garden into several beds. It’s still a work in progress to get the garden to where we want it, but we’re definitely getting there and winning the battle.

Come and stay with us in our relaxing B and B in Cradle Mountain.