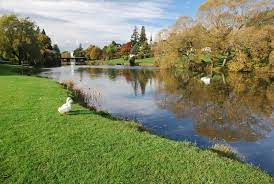 When you’re looking to visit Deloraine in northern Tasmania, there are so many attractions and places to go and see all within an hour’s drive of Glencoe Country B&B. When you’re exploring the north west region of Tassie, there are numerous varied towns to visit. So, come and stay with us, unpack just the once, and go on numerous day trips. Come back each afternoon and relax with a suitable beverage in our comfy, Colonial-style guesthouse.

Located on the banks of the Meander River, the township of Deloraine is a beautiful place to explore and is only 40 minutes from Glencoe.

Deloraine was first explored in 1823, surveyed by Thomas Scott in 1824 and in 1825 the land became some of the first to be leased. The town was named by the surveyor, Thomas Scott, after Sir William Deloraine, a character in Sir Walter Scott’s poem The Lay of the Last Minstrel (1805). Sir Walter Scott was a relative of Thomas Scott. The first house was built in 1831 and the first post office in 1836. However, few people took up the offer of land leases and by 1845 the town only had 20 tenements. The Government then started selling land for £1 (one pound) an acre. This resulted in a rapid growth of the township. Deloraine has been classified as a National Trust ‘town of historic significance.’ 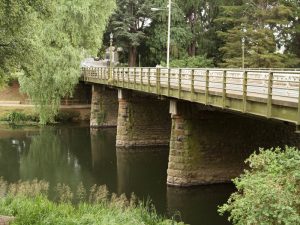 Deloraine has 32 sculptures of various topics located throughout the town and district for you to find. There are 39 buildings and places of historical interest in the town, all in an easy walking distance. It also features numerous and varied Georgian shops and cottages built in the 1840s by convicts. The earliest was Bonney’s Inn, established in 1831. The Old Bush Inn dates to 1848 and is still operating as a restaurant and brewhouse. St Mark’s Church of England – first built in 1847 and then rebuilt in the 1850s – still uses the organ that was imported from England in 1860. The first bridge across the river was built by convicts in 1828 and was rebuilt twice using convict labourers. The current bridge still uses the stone piers from the 1877 bridge. Deloraine is also the birthplace of Admiral Sir John Collins who become famous as the Captain of HMAS Sydney in the Second World War.

If you are interested in racehorses, the town also has the oldest continuously used racecourse in Australia, which dates from 1853. A locally bred racehorse in 1879, named Malua, is little known but should be as famous as Phar Lap or Black Caviar. In 1884, Malua won the nation’s top races from 1100m up to 3200m, including the Newmarket Handicap 1200m, the Oakleigh Handicap 1000m, Adelaide Cup 2600m, and the 1884 Melbourne Cup 3200m. He interrupted a successful stud career in 1886 to win the Australian Cup – then as a 9-year-old – to win the Australian Grand National Hurdle of over 4800m and finally the Geelong Gold Cup as a 10-year-old. No other horse has ever looked like coming close to his record. 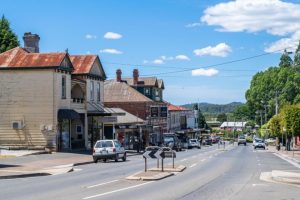 While you’re staying near Cradle Mountain, there are several sites in and around Deloraine that are on the Cradle-to-Coast Tasting Trail. The tasting trail boasts plenty of goodies to sample as well as to buy, which will be guilt-free after you have walked around the town. As well as lots of craft shops, antique shops, art shops and the Folk Museum to explore…it is a picture-perfect town to simply visit and relax in; there really  are so many reasons to visit Deloraine in northern Tasmania and the surrounding region.

Additionally, if you’re after something a little different while you’re staying at our cosy bed & breakfast, Deloraine is the venue for The Tasmanian Craft Fair. It is Australia’s (and indeed the southern hemisphere’s) largest display, sale and working demonstration of arts and crafts, from woodcraft to food craft, plant craft to gift craft and everything in between. A not-for-profit event run by the Rotary Club of Deloraine, the Fair hosts more than two hundred artists and artisans. It is held from October 29 to November 1. Featured artists this year are Neil Hoffman, Helmut Schwabe, Tony Smibert and McLachlan Studio. All of these artists reside in Tasmania but have achieved big things globally.

See more of our blogs here. 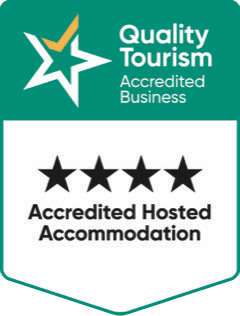